The Wanderers appeared to be cruising after Oriol Riera’s early strike but were forced into extra time with Blacktown substitute James Andrew equalising with just over 20 minutes remaining.

Andrew scored again in extra time to give Blacktown a shock lead before Riera scored a second for the Wanderers to send the game to a penalty shootout.

Tony Popovic’s side proved too strong in the shootout with Janjetovic saving a crucial spot kick to help the Hyundai A-League outfit to a 4-2 victory.

“It might be ugly. I think it was a bit tonight but that’s cup football. That’s what it’s all about.

“Blacktown gave us a run for our money. We like doing things the hard way. I’m glad we’re through.” 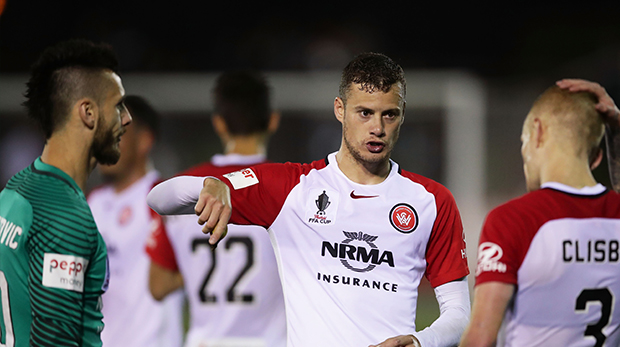 Blacktown knocked out Central Coast Mariners in the Round of 32 and defeated fellow A-League outfit Wellington Phoenix in a friendly just over a week ago.

Asked if the Wanderers had underestimated their PS4 NPL opposition, Janjetovic said his side were well prepared for what Blacktown had to offer.

“No, we played them in a pre-season friendly so we know what they’re about,” he said.

“No surprises there at all. We know they had firepower on the wings.

“They gave us everything we thought was going to come from them.”

This article was originally published at: www.theffacup.com.au/article/western-sydney-wanderers-won-ugly-vedran-janjetovic/y3yc9w4iigei1xx0w2u6i2dxk