The Rapid Rise of Rapinoe 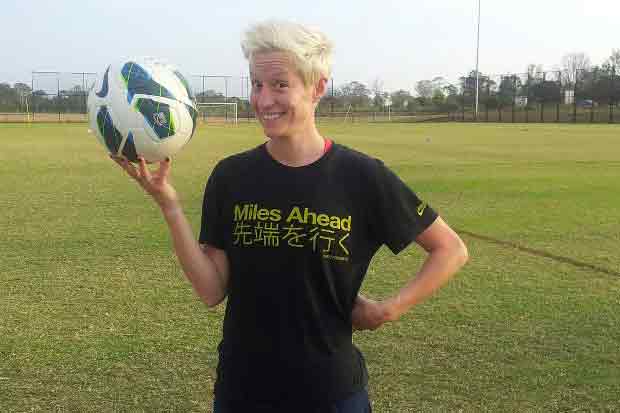 The fame of the Western Sydney Wanderers must be spreading wide and far as American football superstar, Olympic gold medallist and World Cup finalist Megan Rapinoe was spotted at the Wanderers training last night.

The fame of the Western Sydney Wanderers must be spreading wide and far as American football superstar, Olympic gold medallist and World Cup finalist Megan Rapinoe was spotted at the Wanderers training last night.
The players were buzzing to have such a superstar amongst them, and are ready for this weekend-s clash against an in-form Melbourne Victory side.
The midfielder is currently in negotiations with an overseas club, but thoroughly enjoyed the session and did not rule out the possibility of one day returning for a stint with the mighty Wanderers.
“I definitely want to play in the W-League but it did not quite work out this year,” she says.
“I just needed a break after a heavy schedule with my club, international and Olympic commitments.”
The experienced Rapinoe has quickly won many fans with her appearance in last year-s W-League competition and is an inspiration to many in the Wanderers squad, with her Olympic and World Cup success setting a benchmark for younger players to aspire to.
“The whole Olympic experience was very surreal – it was a childhood dream that came true,” she says.
“I could not believe it. I experienced an energy that one does not feel that often; to be in a tight-knit quarter with so many people like you – I could not stop staring at the other players and their uniforms!”
When asked about her thoughts on Tom Sermanni taking over the reins of the mighty United States National side, Rapinoe smiled approvingly.
Having played in the W-League and understanding the influence that Sermanni has had on Australian women-s football, Rapinoe is excited about his new position as coach.
Some teammates, aware of her knowledge of Sermanni, are also excited and looking forward to working with the highly esteemed coach.
“My brain is definitely being picked by the other players,” she says.
“I think he will be really great for us – he has a relaxed attitude, is very experienced and will set the stage for the national side.”
Commenting on the differences between the American and Australian women-s football leagues, Rapinoe noted that members of the American national team are full-time professionals and she has nothing but admiration for the Wanderers and other W-League players who have to juggle work and study commitments with their football.
“I do not know how I would play at this level if I had to go to school or work full-time,” she says.
“I really empathise with the players.”
Rapinoe says that she is impressed with how the quality of football is improving in Australia, with more international players considering the W-League as a very appealing football prospect.
“Football in Australia is growing – I have seen the W-league over the last few years and the standard is improving.
“It is an enticing place to play and more international players are being drawn to the league.”